They Did It Again.

I cannot let this one pass without commenting on it. People who work hard to protect nature and promote it's conservation should be praised.

Our dear friends at BEQA ADVENTURE DIVERS have done it again. Within a space of just three weeks, they have been presented with another award! This time it's for Tourism Sustainability at the AON Fiji Excellence in Tourism Awards.

Just 20 days ago, B.A.D. were awarded the Best in Green Economic Development at the Kutoa Community Impact Awards 2012

For those that are not aware of it, B.A.D. is not just another Scuba diving centre. They are much more than that. As I had said in an earlier post, these guys have been working hard at conservation since before the company was actually formed.  The company was set up in 2004 and a few months later they established the Shark Reef Marine Reserve. The first objective of the Fiji Shark Project set up in 2003 was thus achieved.

The funds collected from the daily dives at Shark Reef is donated to two villages thus helping in their education and economy.

Beqa Adventure Divers also carry out scientific research programmes such as Shark Tagging and Reef Habitat Conservation. They have also sponsored the training of local villagers as Fish Wardens and Snorkelling Guides. In 2009 they developed a Shark Awareness Presentation as part of the Fiji Shark Conservation and Awareness Project, B.A.D.s contribution to the International Year of the Shark. In 2011, they started on the Mangroves for Fiji Project and they have already planted over 39 hectares or 390,000 Mangrove trees!! To kick off 2012, Beqa Adventure Divers are already spear-heading the first ever Fiji Shark Count.

Congratulations my friends. The planet needs more B.A.D. people like you. 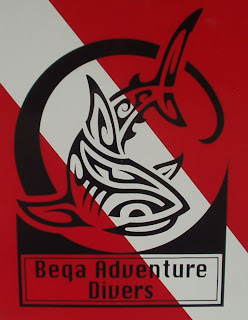