Update on the E.U. Citizens' Initiative to Protect Sharks.

In January of 2020, The Stop Finning - EU Organization initiated the EU Citizens' Initiative to strengthen the EU's shark Finning laws.
Although the removal of fins on board of EU vessels and in EU waters is prohibited and sharks must be landed with their fins naturally attached, the EU is among the biggest exporters of fins and a major transit hub for the global fin trade. EU is a major player in the exploitation of sharks and as inspections at sea are scarce fins are still illegally retained, transhipped, or landed in EU.
The aim is to end the trade of fins in the EU including the import, export and transit of fins other than if naturally attached to the animal’s body. As finning prevents effective shark conservation measures, the organization is requesting to extend REGULATION (EU) No 605/2013 also to the trade of fins and therefore ask the commission to develop a new regulation, extending “fins naturally attached” to all trading of sharks and rays in the EU.
To be successful, the EU Citizens' Initiative needs reach the following targets:
i) To collect a total of One Million signatures of support from EU member states.
ii) At least Seven (7) countries must reach a threshold of signatures equal to 1% of its population.
The seven country target has been reached but so far, only 542000 out of the 1,000000 signatures have been collected and the closing date in the end of this month.
Whilst Austria, France, Germany, Hungary, Malta, Portugal and Spain have reached and passed their threshold, these 20 other nations are still below the target.

SHARKS NEED YOU NOW!
Thank you. 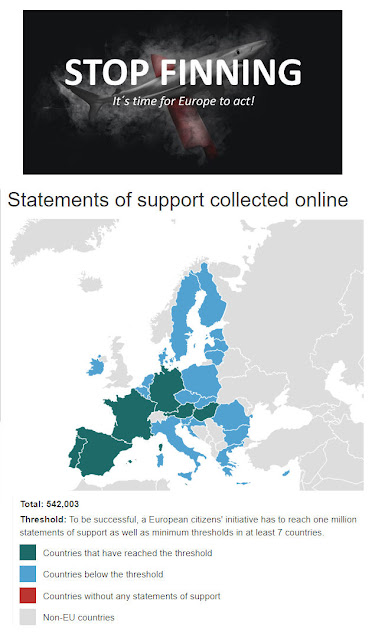